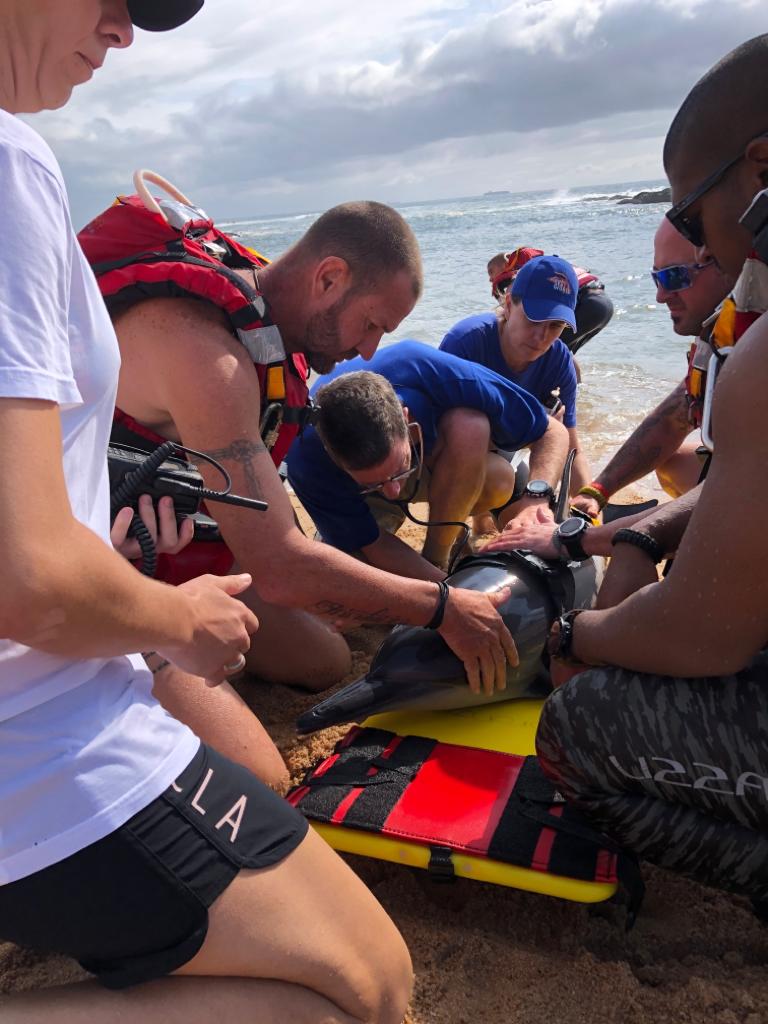 At 05h30 on Sunday morning the 24th of October morning, the KZN Marine Stranding Network  were alerted to a dolphin caught between some rocks and a sandbank in the vicinity of Grannies pool, Umhlanga Rocks beach. A large pod of dolphins were also sighted offshore. The Team mobilised and upon inspection of the sea conditions, there was a strong rip current in the vicinity of the animal and this rescue would require boats and in-water work. The NSRI, Durban Metro Search & Rescue, Ethewini Life Guards and Ezemvelo KZN Wildlife assessed the animal and the options of rescue. The animals’ health was assessed and it appeared to have a few minor scratches but it was strong with a good heart and respiration rate. The animal was soon refloated behind backline with the intention of reuniting the animal with the pod offshore. The animal swam off strongly.

The animal beached again 20 minutes later, close to Bronze beach. Given the location of the animal and the difficulties of securing it, the animal was relocated back to grannies pool, but its condition deteriorated extremely rapidly. A veterinarian was called to the scene to assist. Upon examination, it was found that the animal was severely compromised, in terms of its health. Jointly a decision was made and with the authority of Ezemvelo KZN Wildlife and the Department of Environment, Forestry and Fisheries, the animal was euthanised. Unfortunately, rehabilitation and/or release was not an option for this animal.

The KZN Marine Stranding Network would like to thank the Sea World team (SAAMBR), DBN Metro Search & Rescue, Ethewini lifeguards, Ethewini Parks Department, NSRI Ballito and members of the public for their efforts and assistance.