Ocean’s development is quickly gaining ground. Construction has began for the 3 iconic towers and the Hotel column can been seen emerging from the ground. The first hotel tower crane is currently being erected with the second being installed early in the New Year. A milestone was achieved on site this week with the commissioning of the new Telkom Exchange,this being the last obstruction to the development. A break in site construction will occur between the 22 December 2017 and 8 January 2018. Developers of the Oceans site apologise for any inconvenience caused, the completion date is expected to come sooner and will as a result reduce long term disruption. 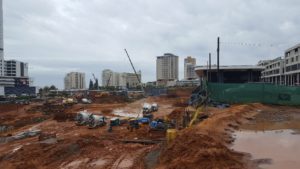