Following last week’s fire and chemical spill in Cornubia and subsequent pollution of the nearby Ohlanga river, teams from the Sibaya and Hawaan Conservation Trusts and WESSA have been hard at work placing water stations in strategic areas for animals to drink. According to ecologist, Allister Starke, water stations were positioned on game paths near the river to encourage the animals to drink from them rather than the river itself. These stations are being used by the animals and will be filled as needed.

We are pleased to report that hazardous waste management company Spilltech was in in the area this morning clearing the beaches of dead fish and other potentially harmful debris.

These efforts will go a long way in protecting the animal and bird life in and around the river and lagoon areas.

Above and below images: The water stations are located along the north and south banks of the Ohlanga river as far as the N2

Below: Spilltech conducts a cleanup of uMhlanga beaches 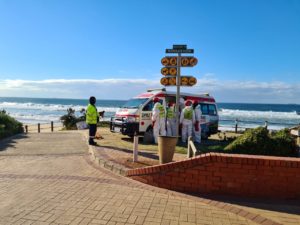